A Florida judge on Wednesday approved the sale of the site of the deadly collapse of a beachfront condo building, with the proceeds to compensate victims and their families.

Miami-Dade Circuit Judge Michael Hanzman gave the green light for the sale of Champlain Tower South in Surfside, which is expected to bring in up to $110 million, .

“He wants us to start exploring a potential sale,” court-appointed administrator Michael Goldberg told the station. “He did say he wants the land to be sold and the proceeds to go directly to the victims as soon as possible.”

The 12-story tower collapsed shortly before 1:30 a.m. on June 24, with officials reporting 95 people are confirmed dead and 14 others still missing as of Tuesday morning.

blue moon האט געשריבן:Miami-Dade Circuit Judge Michael Hanzman gave the green light for the sale of Champlain Tower South in Surfside, which is expected to bring in up to $110 million

Reuvain Borchardt האט געשריבן:
ROOKLYN -
Chaim Rosenberg, z”l, a 52-year-old victim of the Surfside Collapse, was laid to rest Friday, after a levayah in which he was remembered as a devoted father and husband who maintained a fierce emunah despite undergoing a series of tragedies. His daughter and son-in-law, Malki and Benny Weisz, z”l, were later identified as among the deceased as well.

Chaim, a long-time Midwood resident, had recently purchased the condo in the Champlain Towers South, and was hosting Malki and Benny, who live in Lakewood, when a large section of the building collapsed June 24. Chaim’s body was identified Thursday, Benny’s was identified Friday, and Malki’s on Shabbos.

Chaim’s wife, Anna, died just over a year ago after battling cancer for several years, and both his parents died of Covid two weeks apart, just a few months ago.

At the levayah Friday, at the shul of Rabbi Chaim Yisroel Weinfeld in Midwood, where Chaim davened for years, Chaim was recalled as someone who kept a strong emunah despite the many challenges.

“He was mekabel every challenge with simchah and emunah, blind faith that all that Hakadosh Baruch Hu did was just,” Eli Karman, a long-time friend, told Hamodia following the levayah.

Rabbi Weinfeld refernced how the pasuk says that after Sarah Imeinu died, Avraham Avinu went “lispod lesarah vlivkosa, to eulogize Sarah and to mourn her” — but it then it just says “Vayakam me’al pnei meiso” – doesn’t say he was actually maspid. Rabbi Weinfeld cited a pshat that at times we shouldn’t give a proper hesped, because if we would, and speak about the niftar’s greatness, we could chas veshalom come to have questions on Hakadosh Baruch Hu. Sometimes the midas hadin is so strong that it can lead to questions that we don’t want to have, so we are not maspid, said Rabbi Weinfeld, I can’t be maspid Chaim, so we just accept this with emunah.

In addition to Rabbi Weinfeld, those who spoke at the levayah included Chaim’s cousin Moshe Volf Rosenberg, his son Shulie, his stepson Yosef — his wife’s son from a previous marriage, whom Chaim raised as a son — and a friend, Eli Levitin.

“Chaim was the biggest giver I ever knew,” Eli Karman told Hamodia. “He got pleasure out of giving. He wanted everyone to be happy and he would spare no expense to ensure it. One little example: the shul members went to Eretz Yisrael with the rav 25 years ago. This was a wealthy crowd, and everyone flew business class. One member couldn’t afford to go business class, so he got a coach ticker. When he got to airport he saw his ticket was for business class; Chaim had quietly upgraded his ticket. That’s just one example. His life was lived for giving tp other people. If anyone was not satisfied with their situation, whatever it may be, he made it his mission to make sure that person was taken care of. And if there were ever any squabbles in shul, Chaim always made sure the situation got smoothed out — always quietly, behind the scenes. And he was always the guy who made sure everyone knew if someone had a simcha, ‘Remember to give the him a mazel tov.’ Thanks to Chaim, anytime anyone in our shul had a simcha, there wasn’t one person who didn’t comes over and wish him a mazel tov.”

Chaim had “three or four sedarim a day,” Eli Karman says. “I spent his last Shabbos with him, a Shabbos sheva brachos in a hotel. He had a bunch of sefarim with him.” A famous picture from the scene of the collapse shows sefarim being recovered from the rubble; Karman says Chaim’s friends believe the sefarim were Chaim’s. 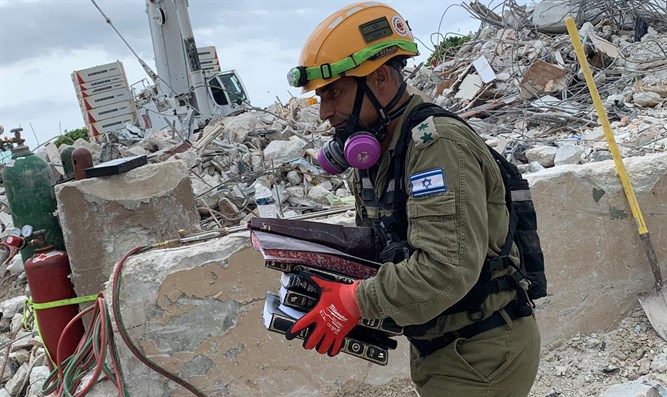 Chaim had quit his job as an asset manager when his wife became ill; with all the emotional difficulties he had been through, he had not started working yet. And he filled his time with learning. “One of Chaim’s close friends, Chaim Scharf, also moved to Florida,” recalls Karman. “For the past year, Chaim told me numerous times, ‘Chaim Scharf saved my life.’ He was referring to a daily seder he had with Chaim Scharf; they would eat breakfast together and learn every morning. It was these sedarim that kept him going through all his terrible difficulties.

“He had sedarim in Gemara, he was learning Meseches Sota and Meseches Avoda Zara, he had a seder in Rambam, and in Likutei Maharan. He was always saying, ‘You have to hear what I just learned in Maharan!’”

Anna Rosenberg had begun fundraising to build a mental-health center for young adults on the campus of Mayanei Hayeshua hospital in Bnei Brak. This initiative, aimed to help overcome the stigma of mental illness, had the backing of gedolim. When Anna passed away, Chaim continued the effort to build the Mercaz Shalom Young Adult Center, in memory of his wife.

As devoted and generous as he was as friend, Karman recalled, “Chaim’s children were everything to him. They took precedence over everything else. If his child had an issue, it would be eating him up — but behind the scenes. He would tell me about it quietly. But he would never allow his children to see that.”

The levayah of Chaim Rosenberg was held Friday morning, followed by kevurah in Wellwood Cemetery in Long Island — right around the time he would have been lovingly setting the table for Shabbos.

“He’d always set the table for Shabbos himself, and have it done before chatzos,” Karman recalls. “He loved Shabbos; he lived for Shabbos. On Shabbos, Chaim was not just a head taller, but his smile was an inch wider, and his glow was a hundred watts brighter.”

The levayah for Malki and Benny was on Sunday.

“He’d always set the table for Shabbos himself, and have it done before chatzos,” Karman recalls. “He loved Shabbos; he lived for Shabbos. On Shabbos, Chaim was not just a head taller, but his smile was an inch wider, and his glow was a hundred watts brighter.”
פיינע ווערטער, יהא זכרו ברוך.
אין עוד מלבדו
צוריק ארויף

In addition to Rabbi Weinfeld, those who spoke at the levayah included Chaim’s cousin Moshe Volf Rosenberg, his son Shulie, his stepson Yosef — his wife’s son from a previous marriage, whom Chaim raised as a son — and a friend, Eli Levitin.