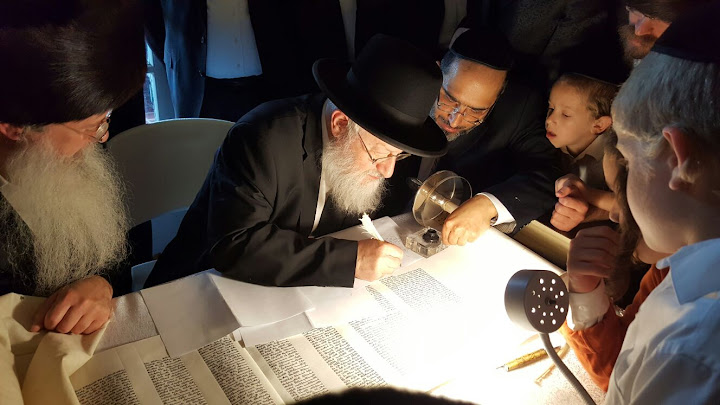 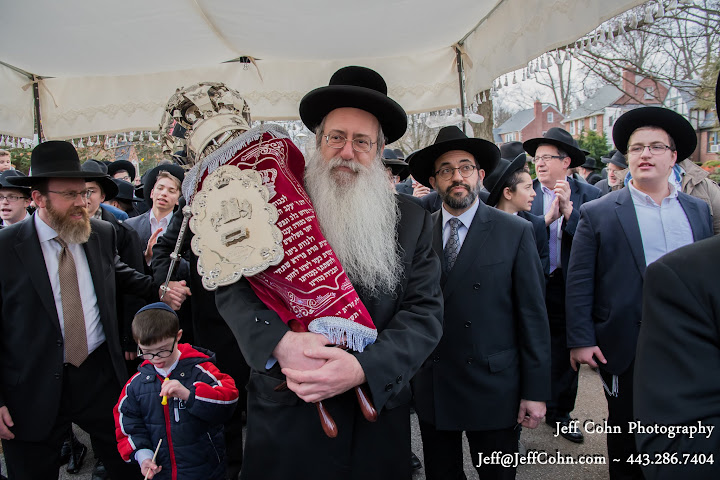 The celebration began with a well attended kesivos osiyos on Wallis Avenue, which was graced by the presence of many Choshuve Rabbonim of Baltimore, including Rav Moshe Heinemann, Rav Yosef Berger, Rav Dovid Heber, Rav Yissochar Dov Eichenstein and others. Assisting in the kesiva was Rabbi Shimon Chaskelson (shoel u’meishiv at the Kollel Le’Hora’ah of K’hal Chassidim) and Rabbi Avrohom Boruch Belz (father of the Sofer, Rabbi Dovid Belz of London).

The Sefer Torah was then transferred to Cheder K’hal Chassidim, located on the corner of Park Heights and Pinkney, from where an exuberant procession began. Accompanied by live music from Korn’s Torah Truck, a leibidig procession led the new sefer Torah up Pinkney Road, across Biltmore Avenue, and down Parkington Road to the Beis HaMedrash of K’hal Chassidim. Hundreds of Rabbanim from across the community, children, Kollel yungeleit, mispellelim of Beis HaMedrash K’hal Chassidim, and many other individuals and families – from Baltimore, New York and New Jersey, came together in a beautiful togetherness to celebrate b’simchas haTorah.

Following the procession, a deluxe seudah was held at Bnos Yisroel, for the Kollel Yungeleit, their families, and members of the kehillah. Harav Hershel Rosenfeld, Rosh Kollel, and Mr. Mordechai Snider delivered divrei Torah.

“The need for the new sefer Torah is a demonstration of the growth of our kehillah,” remarked Rabbi Tzvi Weiss, executive director for Kollel Le’Hora’ah of K’hal Chassidim. “As we continue to grow, we are making preparation for our new facility, which will bezras Hashem have multiple minyanim going on simultaneously, necessitating more sifrei Torah. “

The hachnasas sefer Torah was a joyous occasion for the entire community, and specifically the Park Heights neighborhood, which has been growing stronger and more vibrant, due in large part to the presence of the kollel.

K’hal Chassidim is also pleased to announce that the twenty town homes that are being built at the corner of Park Heights and Taney Road are nearing completion, and they are hopeful that the yungeleit will be able to move into their spacious new homes during the summer months. At the same time, the kollel is preparing to welcome a new group of yungeleit, and they are currently interviewing candidates.

Cheder Khal Chassidim continues to grow as well, and a chassidishe girls’ school will bezras Hashem be established this coming September, with pre-nursery, nursery, and kindergarten classes. 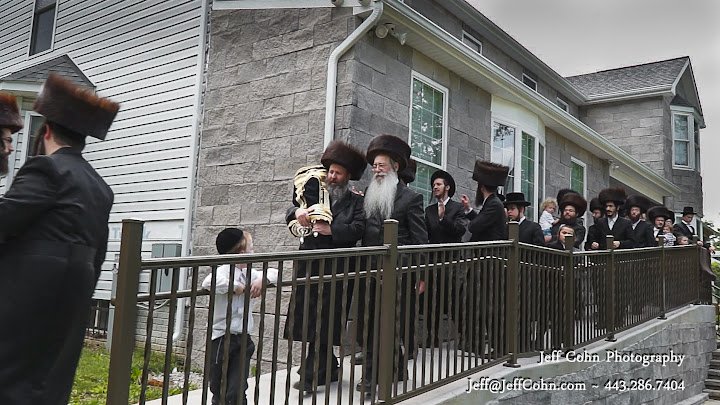